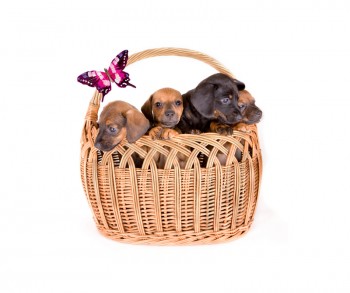 My friend breeds doxies and had a tragedy this weekend.

Gretta went into labor, bringing out one very large puppy, but then she struggled and struggled to bring out the next one.  She took good care of the one puppy, but eventually stopped even trying to birth the others.

They took her to the vet who suggested waiting it out for awhile to see if she could birth the remaining pups naturally.  An X-ray revealed 5 pups still inside, one in the birth canal in a breech position.

He gave Gretta some pitocin to try to stimulate her labor and checked on her several times throughout the night.  By morning, however, all the unborn puppies had died.  When he opened Gretta up, he said the smell would about knock you over – seems several of the puppies had been dead for at least a day.  They were just too large for Gretta to pass.  Tragic!