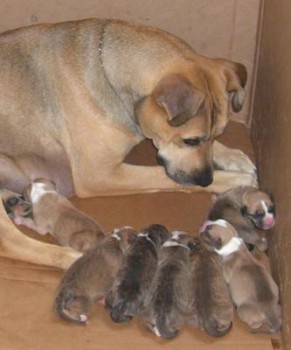 According to a recent story in the Canton Repository, kudos are due to Jada, a mixed breed who lives here in Canton with Tabitha Billings.  Seems an intruder broke into their home and threatened Tabitha and her 3-year old son with a gun.

Jada threatened him right back, forcing him to leave the home.  Not to be denied, the would-be thief fired his gun, striking Jada in the head.  Miracle of all miracles, Jada is fine!  The vet said the bullet just grazed her skull, and he confirmed that she was due to deliver her pups in the next few days.

The blessed event happened this morning when Jada gave birth to seven healthy, happy puppies (pictured above in the Repository’s photo /  Lori Monsewicz).  I love the expression on Jada’s face in this picture.

Nice to hear a happy ending every once in awhile.

One thought on “Pregnant Dog is a Hero”