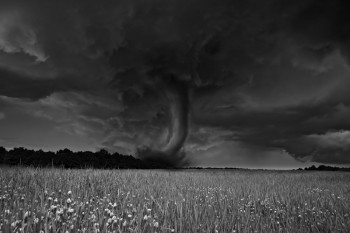 Toto – I don’t think we’re in Kansas anymore!  From the Chicago Sun Times:  a 130-pound Rottweiler named Chase was swept off his feet by a tornado that touched down in suburban Richtor Park on Saturday.  The storm ripped roofs off buildings, crushed garages, and split trees, in addition to carrying Chase about a block away from his home.

According to Northwestern University’ geotechnical engineer Chuck Dowding, given the weight of the dog and the intensity of the storm, such a weird scenario is actually possible.

Chase’s parents Sandra and Sidney Holmes are just glad Chase was okay and came home in one piece.  See a photo of Chase here.