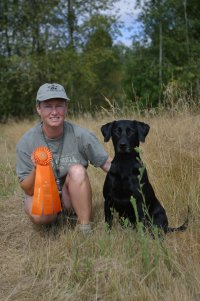 Cera Reusser of Oregon recently lost her beloved black lab, Chase, to cancer.  Rather than just mourn, Cera chose to do something that would benefit other dogs by founding Chase Away Canine Cancer, a fundraiser for the American College of Veterinary Internal Medicine Foundation.

Chase, and Cera’s other three black labs frequently entered competitions as dockdogs, where Chase excelled at the sport.  Several years ago, Cera came home from work to find a lump on Chase.  The vet said the cancer was too far progressed for radiation, but they tried one round of chemo.  However, when Chase began bleeding from his gums, Cera knew it was time to let him go.

Statistics suggest as many as 1 in 3 dogs die of cancer.  Cera decided she had to do something about this horrible fact.  According to the American College of Veterinary Internal Medicine, “This loss has propelled Cera to do as much as she can to help battle this devastating disease and to support animal health studies that may one day lead to a cure for canine cancer and other life-threatening diseases. From selling hats, organizing local fundraising events, to getting the word out to breed clubs and the DockDogs world, Cera has helped raise over $100,000 for canine cancer studies.”

Pretty impressive!  Kudos to those who, like Cera, use their own grief to help others.