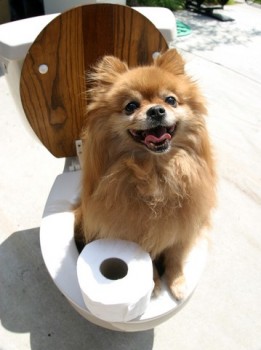 A suburb of Tel Aviv recently announced that it is getting serious about cracking down on those who don’t clean up after their dogs.  It seems they will hire people to scoop up any remaining poop, then test its DNA to identify the offenders.

The six-month trial program will include both rewards and punishments.  All dogs who live in the program area are to be tested to establish their DNA in a database.  Then, when dog crap is found on the sidewalk, it will be scraped up and tested to find a match.  Any matches that are found will result in the guardian having to pay a fine.

On the flip side, if guardians do their civic doody (oops!  I mean duty), and place the poop in a specially marked container, they will be eligible for pet food coupons, dog toys, etc.

Call me a cynic, but who in their right mind would spend their tax money on doing all of these DNA tests?  The tests have got to be horribly expensive, not to mention the labor involved in collecting samples.

One of the comments left on the Gizmodo blog posting about this story points out an obvious flaw in the system: they probably won’t test dogs that are just visiting the area so their DNA won’t be in the database:  “What’s funny about Petach Tikva, is that it’s an ultra orthodox neighborhood. Most of those families don’t even own dogs. So I suppose it’s outsiders that are leaving this crap around. “

Another comment really captures the imagination:  “Just to really screw with them, I am going to take a big ol’ steamer right in one of the lawns. I’m not in any database yet, so I should be safe.”

Now, that would be funny!

If you’re interested in all of the comments (some of which, I warn you, are off-color), you can find the post here.

One thought on “Dog DNA Scoop”