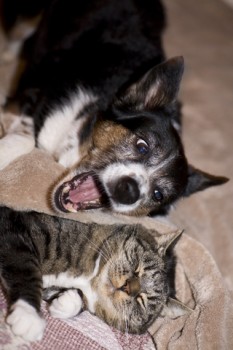 This story caught my eye because, in addition to writing this blog, I am a rape crisis advocate.  You’ve always heard that dogs make good deterrants to crime, but I bet you never thought about it in quite this way…

Seems a man in Texas was convicted of rape, based partly on the DNA found in the dog doo-doo on his shirt.  At some point during the attack, he apparently rolled in the dog’s mess, which contained cells from the dog’s colon, and thus DNA.  A comparison of the DNA on the shirt to the dog’s DNA proved that the man had indeed been at the location of the assault, helping the DA to get a conviction.  The rapist was then sentenced to three life sentences.

In related news, the Chicago Sun Times reports that a homeowner came home recently to find her dining room splattered with blood.  Her 13-year old Rottweiler, Delilah, was locked in another room, breathing heavily.  From what they could piece together, Delilah had attacked an intruder and did some pretty good damage before the burglar was able to lock the dog in another room and make his escape – without stealing anything!  Local police hope they can match DNA from the blood stains to a known criminal in order to catch the would-be thief.

And they say WonderDog is pure fiction!

(Sometimes the pictures need an explanation:  I searched for “attack dog” and this photo came up.  It was too good to pass up, so I had to include it for your viewing pleasure.)