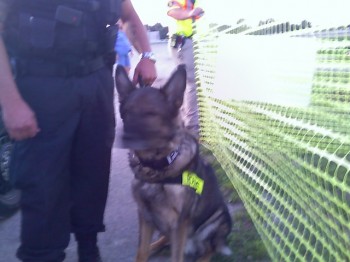 My posts have been a little few and far between this week because I’m working at the community festival surrounding the Pro Football Hall of Fame Enshrinement.

Today, I was honored to meet Buford, one of Canton’s finest.  (And I apologize, Buford, for the smeary picture – not sure what happened.  Let’s just say we are digitizing your face so you don’t blow your undercover status!)

Hard at work protecting and serving the populace of Canton, 7-year old Buford rides with Patrol Officer Gilmore of the Canton Police Department.

I think Buford was a little disappointed when he got out of the car ready to work, and only got his picture taken instead of using his training and skills.

Canton’s K-9 force consists of 11 dog/officer pairs.  They are used for search and rescue, bad-guy tracking, and drug sniffing.

Sleeping better at night knowing Buford is on the job:  priceless!