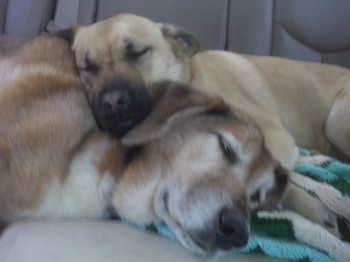 As promised, here is the picture of my brother and sister-in-law’s dogs.  Chance is the ancient one on the bottom, with Matilda sleeping on his head.  They were in the backseat of the truck on the way back to Ohio after a trip to Florida – guess they had too much fun in the sun.

Matilda used to live around the paper plant where  Jim is the maintenance foreman.  I guess someone higher-up visited the plant and said she couldn’t stay any longer, so he brought her home.  I’m not sure Chance thought it was a great idea, but he’s adjusted.

Jim also sent along this update about his previous dog, Lucky’s final resting place. Some of you may have read my post about Lucky’s funeral, when we started our family tradition of drinking shots of tequila over burials.

After it warmed up later that spring after Lucky was buried, a squirrel had planted an acorn right at his head, and a small oak tree was growing.  I transplanted it to a better location, and it is now taller than I am. [I should point out here that my brother is 6’6″!]  So, we still have our Lucky Dog with us, in the form of an oak tree!

What a nice story.