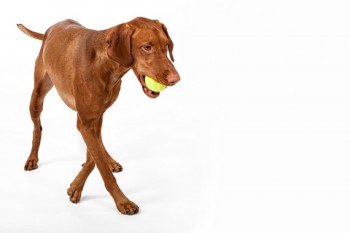 We’ve been trying to build up Cooper’s play drive by playing fetch with him more often, in hopes that he will want to chase a toy off the dock for dock diving.  So, tonight he came over to me with a ball in his mouth.  Naturally, I threw it for him, and praised the heck out of him when he brought it back.  He gave it to me pretty easily, so I threw it again, but it went under the edge of the bed.   (I throw like a girl.)  He couldn’t see it, but he looked around for awhile, and I’m saying “Go get it!  Go get it!  Good boy, Cooper!”  He appeared to lose interest because he couldn’t see it, then he went and got a different ball and brought it to me.  I guess he’s not as dopey as he looks!

7 thoughts on “Are you smarter than a 5th-grade Vizsla, Dog Lady?”