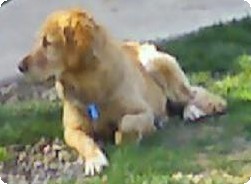 Poor Maggie.  My beautiful 10-year old Golden Retriever just didn’t seem right on Tuesday, so we took her to the vet.  She had a fever of 105.9 (which later topped out at 107F), and she had begun having seizures.  We thought for sure she had brain cancer, but her bloodwork was normal, and a chest X-ray was clear.

The vet has had her for 2 days now, and can’t really find anything wrong with her.  He offered to refer us to a specialist for a CAT scan, but I think that’s a little extreme for a 10-year old dog, as well as for my budget.  So, we’re taking a wait-and-see approach.

Thought for sure we were going to have to put her down, but the vet tells us we can bring her home this afternoon!  Her fever is down with antibiotics, and he has gotten her seizures under control with phenobarbitol.  This is twice now she’s cheated death – remember this is the dog who had thyroid cancer a couple of years ago.  I’m thinking of re-classifying her as a cat since she apparently has many lives.

Say a prayer for my baby!