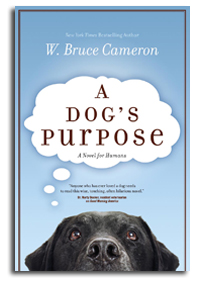 I spent last weekend reading A Dog’s Purpose by W. Bruce Cameron.  What a delight!  Cameron is most often recognized as a humor writer, having penned three funny novels including one that was the basis for the TV show 8 Simple Rules for Dating my Teenage Daughter. In this book, he takes a more serious turn, although he allows his humor to shine through a few times.  (After his family buries a recently departed house pet, the dog digs her up for them, reasoning, “they can’t possibly have meant to bury a perfectly good dead cat.”)

The premise of the book is to look at the world through a dog’s eyes as the dog seeks to discover his purpose in the world.  He starts out as a feral dog who is taken in by a well-meaning, but in way over her head animal hoarder.  When he is liberated from “The Yard” by animal control, he is euthanized as “unadoptable” following a run-in with a Pit Bull who was making moves on his girl.  But no worries, he is reincarnated as a puppy in a puppy mill, and is soon adopted by a fabulous family.

Most of the book centers on his life with that family, and the book gives great insight into the unconditional love dogs give us.  He never assumes anyone is malicious, he just thinks they made a mistake.  After being locked in the garage while his boy went to school, the dog chews everything he can get his mouth on.  When the family tells him he is a bad dog, he thinks, “I was astonished by this false accusation.  Bad?  I’d been accidentally locked in the garage but was more than willing to forgive them.”

The dog thinks he has found his purpose in life when he saves the family from an arson fire.  He grows old on the family farm and eventually dies of old age.  Imagine his surprise when he is reincarnated again…this time as a girl dog! In this third lifetime, he becomes a stellar search and rescue dog, again assuming he has found his purpose as he rescues several people, then becomes a therapy dog in his retirement.  After a long and fulfilling third life, he welcomes euthanasia (another interesting insight) because he is tired and knows that by dying he will no longer be in pain.

Again, however, he is reincarnated as a puppy.  I can’t tell you any more of the story because I don’t want to ruin the ending for you.  Suffice it to say, this fourth life is where he discovers why he was really put on this earth.  He uses all of the experiences gained in his earlier three lives to fulfill his most important mission yet.

Once you get past the Shirley McLain-ish reincarnations, this is a beautiful story.  You realize it had to be told as reincarnations, because no one dog could possibly experience all that this dog does over the course of his four lives.

Put this one on your reading list – it’s definitely worth your while.  You can tell that Cameron has spent a lifetime studying dog behavior.  His descriptions of pack behavior and the bond between a dog and his people are spot on.