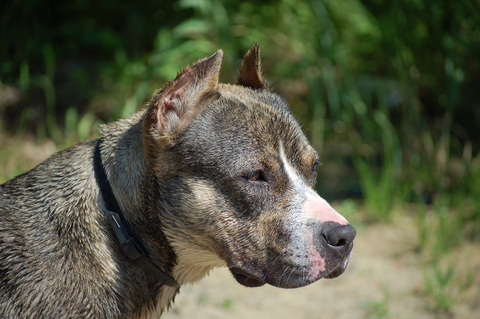 If you didn’t live under a rock last fall, you may remember the exotic animal keeper in Zanesville, Ohio, who let his animals run loose before he killed himself. Lions and tigers and bears were found running loose and unfortunately, had to be killed to protect people living in the area. For a long time, Ohio has been at or near the bottom of the rankings of states for animal welfare laws. Changes are now being made, starting with the state’s treatment of dogs.

Until recently, all Pit Bulls in Ohio were classified as vicious dogs from the moment they were born, meaning that if a Pittie bit someone, he was automatically put down. Other dogs who bit were often returned to their owners, once it was determined that rabies wasn’t a problem. Owners were required to take special precautions such as extra tall fences and additional insurance, although few complied with the laws.

Governor Kasich has recently signed House Bill 14 into law, which allows officials to identify dogs as vicious, dangerous, or mere nuisances, based on the specific dog’s behavior rather than by breed. The law goes into effect this May.

Up next on the animal welfare agenda in Ohio: a state law to ban dog auctions and legislation to regulate puppy mills and rid Ohio of bad breeders.

Ohio legislatures have also proposed wild animal legislation banning the sale or purchase of exotic animals, but it allows current owners to keep their current exotics. This provision is unacceptable to Columbus Zoo Director Emeritus Jack Hanna who says, “If you found someone who had a bomb in their basement, you’d take it away, wouldn’t you?”

So, we still have some progress to be made, but at least breed-specific dog legislation has been abolished