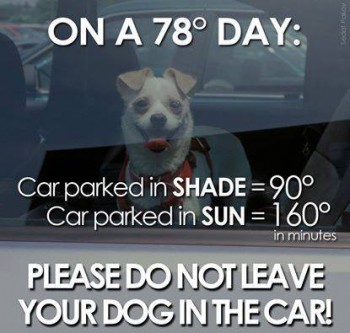 Another rant from Chief Oliver of the Brimfield Police Department. You can see why his tiny little police force is the 4th highest ranked in Facebook friends in the country. (Behind other little burgs like NYC.)

He doesn’t always talk about dogs, but he always shoots from the hip.

****This is my opinion. It may not be the opinion of anyone who is above me in rank, pay grade, looks or intelligence. I write it, I claim it….someday I may be unemployed because of running my mouth; I am cool with that. It is better to die on your feet than live on your knees.****

We had two of them today. I cringe when I hear about these calls. These aren’t the earth shattering calls that give officers nightmares….these are the calls that annoy us to no end…..

Hey, genius….leave your dog at HOME when you go shopping, please….

We get these calls during the summer quite frequently. We had two so far today on afternoon shift. “Animal complaint….check for a canine left in a vehicle….” Seriously? Some people see no issue with leaving a dog in a car when the outside temperature is 88 degrees? So, what is the temp in the car….648 degrees?? We are all aware of the scientific fact that most dogs have fur, right?

Usually the officers pull up, get a plate number and find the person. Sometimes the pet owners are coming out as we are arriving. Most of them see nothing wrong with “running in for just a minute to grab something.”….. while the car is off, the windows are “cracked to give him some air” and all is otherwise right in the world of someone who is not thinking ahead.

Fair warning….we are going to start looking at animal cruelty charges in these cases. It’s not because we are jerks (you all know better)….it’s because it is wrong….and we protect the defenseless. It was 85+ today on both calls. The dogs were panting like they had just chased a rabbit for the last 500 miles. It’s just wrong…. and it is common sense….

So, the next time you drive through a store parking lot and see someone in the back seat of their car, with their nose sticking out a “cracked window”….don’t give it a second thought. The officer and the dog will be in the store, visiting. The owner will be locked in the car…panting. I sure hope the officer and dog don’t run into an old friend and start talking….yikes!

Owning a pet is a responsibility…not a status…..

One thought on “Go Chief Oliver – You Rock!”