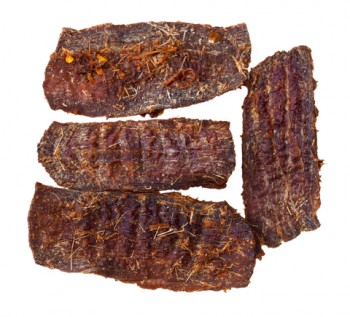 The FDA has conducted more than 1,200 tests and has visited the Chinese factories where most jerky is manufactured. Vets have been sent a letter asking for their help and a copy of a fact sheet explaining how pet families can also help in tracking down this mysterious problem.

According to the update issued yesterday by the FDA: Within hours of eating treats sold as jerky tenders or strips made of chicken, duck, sweet potatoes and/or dried fruit, some pets have exhibited decreased appetite, decreased activity, vomiting, diarrhea (sometimes with blood or mucus), increased water consumption, and/or increased urination.

The remaining cases reported various symptoms, such as collapse, convulsions or skin issues.

If you notice these symptoms in your dog, please contact the FDA Safety Reporting Portal or your local FDA Consumer Complaint Coordinator and let them know.

2 thoughts on “Why are Jerky Treats Making Dogs Sick?”