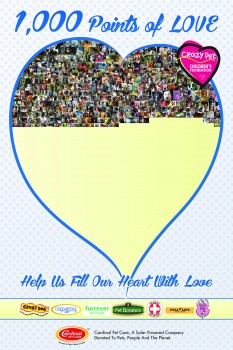 WORCESTER, MA – A dog can make a big difference in a kid’s life — but having a canine companion can be a life-changing event for a child with a disability who gets paired with a trained service dog.

Matthew has Asperger’s Syndrome, a condition that makes it difficult and terrifying to go out in public and interact with people. After he received his service dog, “Quincy,” the 8-year-old started coming out of his shell and his precocious intelligence began to shine. “I love my dog because he helps me with a lot of things that sometimes I can’t control,” said Matt. “Sometimes I’m crying in a crowd, and Quincy helps me a ton by licking and kissing me so I feel better. He helps me talk to people.”

Matt and Quincy were brought together by Canines for Disabled Kids (CDK), a non-profit Worcester, MA-based organization that helps disabled children across the US connect with dogs that can assist them in their daily lives — whether it’s turning on lights, picking up objects, or simply making them feel less alone and scared. Given their own special four-legged “helper,” children with autism, hearing impairments, paralysis and a variety of other disabilities have overcome their limitations and gone on to lead independent and confident lives.

But, unfortunately, many service dog programs don’t accept kids under 18, which is why CDK was started. The group works with service dog training organizations around the country, such as Canine Partners For Life, to find the perfect canine companion for children with a wide range of disabilities.

Since its founding in 1998, the organization has helped pair more than 130 service dogs with young people like Matthew and wheelchair-bound teenager Erica, another of the organization’s many stellar success stories.

Before canine friend “Baker” came into her life, Erica’s ambitions of going to college and studying marine biology seemed like a far-fetched dream. Her family was concerned about the safety risks that Erica’s desire for an independent lifestyle would expose her to. Not only did the fluffy Golden Retriever help Erica with tasks like opening doors, he became her constant protector, riding along on the school bus every day and going shopping with her at the mall. When Erica graduated from high school (with Baker proudly at her side), the best friends embarked on the next phase of their adventure together, heading off to college!

As part of its mission to bring child-canine teams together, CDK offers scholarships to help defray the cost of training a service dog. Families are typically expected to pay an average of $12,000-$15,000 of the $25,000 it costs to train a service dog. With many families already saddled with medical expenses, this was often more than they could afford.

Now CDK has an angel-benefactor of its own. Cardinal Pet Care, a Los Angeles-based pet product manufacturer, has chosen the organization to be the recipient of a grant from its charitable Crazy Pet Children’s Foundation’s (CPFC) 1,000 Points Of Love fund-raising campaign. The company has posted a giant heart on its website which it hopes to fill with pictures of dogs sent in by their owners. CPFC will donate $1 for each dog picture it receives and then award a $1,000 grant to CDK once the heart gets filled with 1,000 photos, thus the campaign’s name –“1000 Points Of Love.”

A unique feature of the 1000 Points Of Love campaign is that it doesn’t ask for monetary donations, it just requests that people email a photo of their dog. Barbara Denzer, Cardinal Pet Care’s vice president, explained why: “We wanted to give people a chance to contribute to this great cause without asking for money. Sending a picture of your dog is such a visible way to show kids we care about them. Photos of pets are a far more personal and emotional donation. The project is a great way to support Canines For Disabled Kids.”

“This support is so important to helping children come together with the perfect service dog. These funds will go a long way in helping to bring another child and service dog together,” says Kristin Hartness, CDK’s executive director.

Pet owners can help by sending a picture of their dog (or their friend or neighbor’s dog) to [email protected] The pictures will be used to create a giant heart-shaped poster. For more information go to the Canines for Kids site.

Please send in your photos now!