When hikers found this mess of a dog on a cliff behind Lambert Castle at Garrett Mountain Park in northern New Jersey, they never dreamed it would take more than 20 people and over 3 hours to get her down. She was subsequently named Clover, and she apparently does have the luck of the Irish.

NorthJersey.com is reporting that the dog was found “dirty, disheveled, dehydrated, underfed [and] nameless” on Monday, but by Tuesday had received a reasonably clean bill of health from the Animal Clinic of Morris Plains.

After she was shaved, the poodle mix weighed in at 22 pounds and looks MUCH more comfortable. Although she is skinny, she doesn’t look like she’s been on her own for too awfully long. Officials suspect she once had a had a home but was abandoned without tags or a microchip.

John DeCando, Patterson animal control officer, said it was a good thing Clover was rescued when she was, because snow had been expected int he area Monday night. “With the weather coming, I don’t think she would’ve made it,” he said.

DeCando worked with more than 20 Patterson firefighters and officers from the Passaic County sheriff’s office to free Clover from a small ravine on the cliff. They tried approaching from the bottom by ladder, but couldn’t get the dog to come to them, even when they offered her food It ended up that someone had to repel 50 feet down the cliff and carry the little dog back up.

Clover is being kept at the vet’s office for a week in hopes that her owner will come forward If not, she will be placed for adoption by Second Chance Pet Adoption League in Oak Ridge. Their number is 973-208-1054 if you’re interested.

By the way, here’s the “after” picture, again from Kevin Wexler, a staff photographer at NorthJerseey.com. 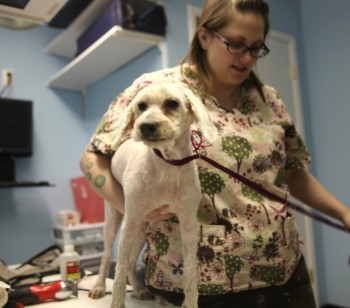 I think we’ll file this one under “all’s well that ends well.”