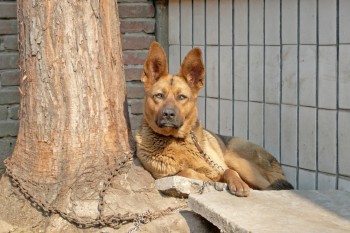 OK, so this is something I didn’t know until I read today’s paper. In the city of Canton (very close to where I live), there are laws about barking, trapping animals, animals running at large, and the number of pets a family may have at one time, but there is no law that makes it illegal to treat your dog badly. Weird, right?

Canton’s City Council is seeking to rectify that with a new law that would restrict residents from confining an animal without access to shelter, beating an animal, or depriving an animal of food or water. They may also not be tethered during severe weather and cannot be denied access to exercise and medical care.

The new ordinance is modeled on similar laws in nearby Cleveland and Akron. The city’s legislators will vote on the new law on June 15th. So, for those of you here in Canton, make sure you call your council person and remind them how important this law is.

I think it’s a good first step. The real answer, though, lies in enforcement. Only time will tell how many teeth this new law will have.

If you don’t have animal cruelty laws where you live, why not make a call to your elected officials and propose that these laws be added? Be a good advocate for those who can’t speak for themselves.