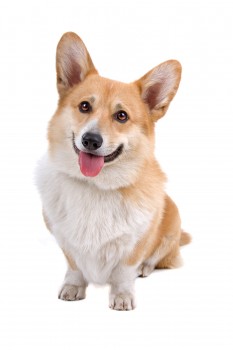 The winner in the 12-inch Master Agility competition was Keebler, a Pembroke Welsh Corgi, who defended her title from last year. It’s especially amazing because she is recovering from being stepped on by one of the larger dogs at her house. Her time was 34.37 with no faults. And to think she almost wasn’t rescued – the shelter had to call her family at least three times and finally convinced them to foster the dog on a trial basis. They named her, so they had to keep her!

You might be noticing that dogs of the same breed can compete in different height classes. There are two reasons for this: first, a senior dog is allowed to compete in the next lower height class, if desired. Secondly, two dogs of the same breed may be slightly different heights, which can lead to one being in a lower or higher class if they are right around the cut-off point.

Highlights from this class: Tommy, a Parson Russell Terrier, was lost for over a year before his family found him again. And Fanny, a Cavalier King Charles Spaniel was handled by a 14-old! Dobby, the rescue All American dog, has a day job as a dental therapy dog, apparently helping people calm down in the dentist’s chair.

Next up: the big dogs of the 24-inch class, our final competitors.