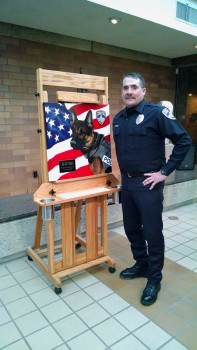 A public unveiling of an oil painting memorializing Jethro, the Canton Police Department K-9 officer killed in the line of duty in January, was held on Saturday, April 9, 2016 at 10:00 a.m. in the Canton Museum of Art’s Wilkof Courtyard. The presentation was made to Jethro’s partner, Officer Ryan Davis, and to the Canton Police Department. The unveiling is being held around two new exhibitions, “Wounded Warrior Dogs” and “K9 Heroes,” both featured in the Museum lobby.

The “Jethro” portrait was painted in conjunction with “The K9 Hero Portrait Project,” an organization dedicated to creating fine works of art for the families of K-9 and equine heroes. The artist, Loreen Pantaleone, created the piece as a gift to Jethro’s partner, his family, and to the Canton community.

“We are honored to host this tremendous presentation to Officer Davis and our Canton community,” said Max Barton, the Museum’s executive director. “Jethro honored us all with his service and sacrifice, and I hope this amazing painting serves as a small way to say ‘thank you, you are not forgotten’ to Jethro and Officer Davis – and to memorialize Jethro as a loyal K-9 officer and devoted family member.”

The artist began her painting career over fifteen years ago while living in Bucks County, Pennsylvania. Self-taught in multiple art medias, Pantaleone quickly became known as “the artist who captures the animal’s spirit in her work,” and she has painted over 1,000 commissioned portraits of animals.

“Quitting my job in the financial industry to paint and donate commemorative portraits of K-9 heroes was an easy choice,” said Pantaleone. “With the current media outlets and social networking, it is becoming widely accepted that our ‘tough as nails’ soldiers and law enforcement officers can show their feelings about their K-9 partners. This has a humanizing affect which will help garner more support towards the uniforms that serve our country.”

In early 2013, Pantaleone created “The K9 Hero Portrait Project” after viewing several images on social networking pages of grief-stricken handlers that had either witnessed the injury or death of their K-9 partner. Those images resonated with Pantaleone, bringing home that these K-9 officers are more than just partners – they are family. Within 24 hours of announcing this new program, nominations began pouring in. The first nominations came from U.S. soldiers still serving with their K-9 partners in the Middle East.

Pantaleone now focuses her time exclusively creating and donating these large, life-like portraits to the soldiers, handlers, and families of K-9 heroes to show her support of the men and women and canines who selflessly serve our country in many capacities. Learn more about Loreen Pantaleone and The K9 Hero Portrait Project