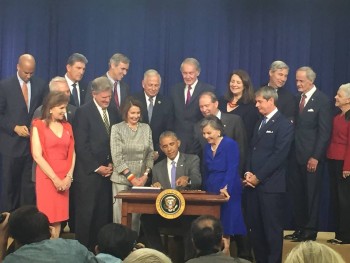 President Obama signed the revised Toxic Substances Control Act yesterday, updating a 40-year old law. What’s that got to do with dogs and other animals? Actually, it’s vitally important to animal welfare, and here’s why.

For the first time ever in environmental law, there was specific mention that Congress wants those who are testing toxins to minimize animal testing. There is now a clear preference for alternative methods of risk assessment for products such as chemicals, pesticides, cosmetics.

The mandate to the Environmental Protection Agency is clear: find better ways of testing that don’t involve animals. Partly because animal testing is expensive and slow, and partly because animal reactions don’t always predict human reactions to substances, the Organization for Economic Cooperation and Development (which includes the US) has agreed to move away from animal testing.

After the historic signing, the White House tweeted: “For the first time…we’ll actually be able to regulate chemicals effectively.” —@POTUS on #ChemicalSafety Act”

Kudos to all who fought for this change.