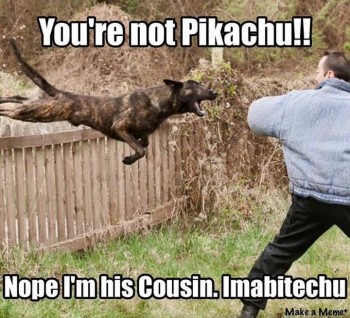 According to a story circulating on Facebook, a Muncie, Indiana, animal shelter started a program where you could rent a dog for $5 an hour to walk with you while you were playing Pokemon Go, so people wouldn’t think you were an idiot. This much is true, although I don’t think they actually charged people; they just wanted dog walkers.

Where the story crosses into urban legend territory is when the results of the program were way overblown. According to the version I read, they now have a waiting list because so many of their dogs got adopted, either by people who fell in love with the dogs while walking them or by people who saw them out walking or found pictures featuring the dogs posted online by the walkers.

The “rental program” purportedly brought in so much money, the shelter was able to waive adoption fees for all the dogs they placed. This, too, is reportedly false.

You can read the whole story and rebuttal on Snopes, if you’re interested.

Regardless of whether or not the shelter had adoption success with this program, it does seem like a good way to get the dogs walked every day. Kind of the Tom Sawyer approach to getting someone else to do the work. When they’re done walking, I’ve got a picket fence that needs whitewashed!

My only concern is how well they are screening people before they let them take the dogs out. It’s a well-known fact that pedophiles often apply to be foster parents, so I have to believe dog fighters and other abusers might try to pick up a dog or two this way.