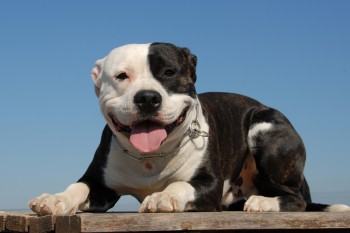 I posted a video yesterday concerning the new pit bull ban going into effect in Montreal on October 3rd. What I didn’t mention is the effect this is having on the city’s shelters.

Since no one will be allowed to obtain a new pit bull, the entire population of shelter pit bulls is subject to euthanasia. I have to believe many who could be grandfathered in under the new law will also choose to surrender their dogs rather than go to the expense of complying with all of the provisions.

Some of the dogs are being pulled by rescue organizations and / or moved to other provinces who have no breed specific legislation, but it still sounds as if it will be a slaughter. So sad!

If you’ve ever thought about adopting a pittie, this may be just the right time.