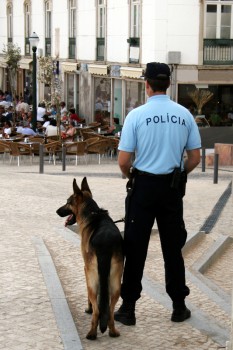 Have you seen the stories out of the tiny community of Mulberry, Florida?  Officer Sara Movahedi, the department’s only K-9 officer, was switched to a new vehicle that was not yet fully outfitted with the protective equipment important to the dog’s well-being.

Officer Movahedi went into the police station at 12:20, leaving the vehicle’s air conditioning running, as per standard operating procedure.  When she returned to the vehicle after 3 hours of paperwork, she found the dog dead and the air conditioner blowing hot air due to the failure of the compressor.

Due to the high cost of a police dog, K-9 vehicles are normally equipped with heat sensors that detect the emperature inside the car.  When the heat rises, the sensor mechanisms sound the car alarm, page the officer, start a fan, and open the vehicle windows.  Tragically, Officer Movahedi’s replacement vehicle had not yet been outfitted with the safety equipment.

The dog, named Sam Diesel, was purchased with money donated by employees from several Wal-Mart stores.  As with most police dogs, Sam cost $8.500 to purchase and $15,000 to train for crowd control, drug searches, recovering stolen merchandise and searching for missing people.

For those who think the dog should have been taken inside the station with the officer, Police Chief Larry Cavallaro states he hopes to use this tragedy to educate the public.  “The dogs are not trained to be kenneled outside this car. They understand in their training that when this door pops open they’re going to work and that’s part of the training and when it happens the dog knows that he or she is being deployed and that’s what they react to.”

What do you think?  Does that statement stand the smell test?  Does a dog think he is going to work when he gets out of the car at his home?  Seems like if he can “turn it off” in some situations, he ought to be able to react appropriately in the station as well.  Or are they worried about what the dog will detect inside the station?   The Mulberry Police Department is rewriting some of its procedures as a result of this heartbreak, but apparently this is not one of the things that will be revised.

Admittedly, this is only one example, but I did a bit of surfing for a police department that had its K-9 procedures online.  According to the Lynnwood, WA Police Department policy manual:

“UNATTENDED POLICE SERVICE DOGS:  As a general rule, police service dogs should not be left unattended for an extended period of time. When not under the immediate control of the respective handler, the dog is to be secured in a Department issued kennel, or inside a properly equipped canine vehicle. ”

In Mulberry, it appears that dogs aren’t allowed to be kept inside the station, even in an approved kennel, nor was the vehicle properly equipped.  I don’t blame the officer here, she was apparently doing the best she could with the equipment and policies she was given.  It appears that the department, however, could have done a few things to prevent this needless death of an expensive and highly trained animal.

One thought on “Death of a Police Dog”