OK, since it is now Wednesday, I thought it would be a good time to follow up on Monday’s post about a dog named Tuesday.  I stumbled across this article from the Wall Street Journal while I was looking for something else.  If you watched the third video attached to Monday’s post, you learned a bit about Tuesday, a dog who helps veteran Luis Carlos Montalvan deal with severe PTSD.  Here’s “The Rest of the Story.”

Trained for 2 Years, Retriever Helps Mr. Montalvan Get Back on His Feet

NEW YORK — Like any other golden retriever seeking a treat, Tuesday nudged his owner’s hand with his snout one recent morning and waited expectantly.

Luis Carlos Montalvan got up from a chair in his small Brooklyn apartment and walked to the kitchen. Tuesday followed close behind, eyes fixed on a white cabinet. The retriever sat alertly as Mr. Montalvan, an Iraq war veteran with severe post-traumatic stress disorder, reached for a vial of pills, lined a half-dozen on the table and took them one by one.

The dog had gotten what he wanted: When the last pill was swallowed, he got up and followed his master out of the kitchen, tail wagging.

Tuesday is a so-called psychiatric-service dog, a new generation of animals trained to help people whose suffering is not physical, but emotional. They are, effectively, Seeing Eye dogs for the mind.

Tuesday is with Mr. Montalvan at all hours. Taught to recognize changes in a person’s breathing, perspiration or scent that can indicate an imminent panic attack, Tuesday can keep Mr. Montalvan buffered from crowds or deliver a calming nuzzle. Other dogs, typically golden retrievers, Labradors or Labrador retriever blends, are trained to wake masters from debilitating nightmares and to help patients differentiate between hallucinations and reality by barking if a real person is nearby.

“Tuesday is just extraordinarily empathetic,” said Mr. Montalvan, 36 years old, a retired Army captain who received a Purple Heart for wounds he suffered in Iraq. “In bad moments, he’ll lay his head on my leg, and it’ll be like he’s saying, ‘You’re OK. You’re not alone.'”

Seeing Eye dogs were first systematically trained in Germany during World War I to aid blinded veterans. Today, psychiatric-service dogs are being trained to help veterans of Iraq and Afghanistan battles.

The federal government has given the dogs the same legal protections as other service animals, so Tuesday can ride the subway with Mr. Montalvan and accompany him to restaurants and theaters. But few of the dogs are available to former troops like Mr. Montalvan, one of the estimated 300,000 veterans of the two wars who will ultimately develop PTSD.

When Luis Montalvan was an Army Captain stationed in Iraq, he suffered serious injuries in an ambush. Back in the States, he’s finding comfort from a service dog that tends to his injuries, both physical and emotional.

Puppies Behind Bars Inc., a New York-based nonprofit that uses prisoners to train animals, has placed psychiatric-service dogs with 11 veterans and hopes to provide 14 more this year. Gloria Gilbert Stoga, the charity’s president, said it is difficult to raise the $26,000 needed to train each dog. “We’re just scratching the surface,” she said.

Tuesday was eight weeks old when he and five siblings were turned over to Puppies Behind Bars, who moved them to New York’s Fishkill Correctional Facility. The pup shared a cell with John Pucci, a convicted killer who assumed primary responsibility for molding Tuesday into a service dog.

“No one thought he would make it,” said Mr. Pucci, explaining that Tuesday would fall asleep in other prisoners’ laps as they watched television and would sometimes hide under Mr. Pucci’s bed and refuse to leave the cell. Inmates bet Mr. Pucci some cigarettes that Tuesday was too affectionate to be a service dog.

Mr. Pucci discovered that Tuesday loved the jail’s small inflatable pool and would run through commands perfectly if he was in the water. In nine months, Mr. Pucci taught Tuesday to respond to 82 commands geared mainly toward helping the physically disabled — turning on lights with his nose, retrieving food from shelves, helping load washing machines.

“I got released before I could collect the cigarettes,” said Mr. Pucci, 64 years old, who served 29 years and now lives in San Antonio, Texas, where he continues to train dogs.

Tuesday returned to Ms. Picard’s farm, where his skills were fine-tuned for another 18 months. Ms. Picard taught him to respond to signs of anxiety and commands tailored to veterans with PTSD: “block,” which tells the dog to create space for an owner who fears crowds, “my lap” and “snuggle.”

Mr. Montalvan grew up in Potomac, Md., a wealthy suburb of Washington, where he played war games with friends. He enlisted at 17, spent a decade in the Army and enrolled in college to pursue a career as an officer.

In the summer of 2003, newly commissioned as a second lieutenant, he left for Iraq. Photos from the time show a square-jawed man with bulging muscles. Comrades jokingly called him the “Terminator.” 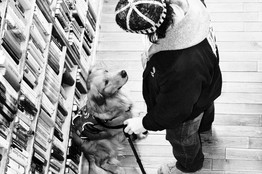 Luis Carlos Montalvan at a New York bookstore with Tuesday, who goes with him everywhere and is trained to respond to signs of anxiety.

That changed in December 2003. Mr. Montalvan was walking in a compound on Iraq’s border with Syria at around 9:30 p.m. when a man leaped out of the darkness and started slashing at him with a knife.

He pulled out his Beretta and shot the man, wounding him. Another soldier killed the attacker, according to Army records and several soldiers who served in the unit. Mr. Montalvan was thrown into a truck, fracturing three vertebrae.

Tall with long hair and broad shoulders, Mr. Montalvan now walks with a cane. But his biggest problems, he says, are emotional. “Sometimes my mind goes jumbled,” he said one afternoon as he struggled to remember which subway line to take home. “Everything just gets kind of cloudy.”

His marriage fell apart in late 2005. He left the Army two years later and severed many friendships. He began to fear crowds and drink himself to sleep. He regularly considered suicide, he says. A local Veterans Affairs medical facility has prescribed painkillers for his back, migraine pills for brain injury, and drugs for anxiety and depression.

By last summer, Mr. Montalvan was living alone in a small apartment in Brooklyn. He was surfing the Web in July when he saw a mass email about free trained service dogs for veterans with physical or psychological wounds — the “Dog Tags” program of Puppies Behind Bars.

He submitted a formal application. By early November, he joined a group of veterans at Ms. Picard’s farm in Dobbs Ferry, N.Y., for two weeks of training with their new dogs.

Mr. Montalvan says he initially didn’t feel much of a connection to Tuesday. The dog licked other people’s faces, but not his. For the first four months they lived together in Brooklyn, Tuesday was obedient but not particularly affectionate.

“I guess it just took us a while to adjust to each other,” he says.

They did. Tuesday, now 3 years old, listens to the daily alarm on Mr. Montalvan’s wristwatch, his cue to make sure he takes his pills. Wearing the red harness of a work dog, he accompanies Mr. Montalvan to Dunkin’ Donuts and the movie theater, to Veterans Administration group counseling sessions in Manhattan, and to Columbia University, where Mr. Montalvan is studying journalism and communication.

At Mr. Montalvan’s apartment — decorated with his Purple Heart and Bronze Star certificates, and pictures and paintings of Tuesday — they sleep in the same wooden sleigh bed.

On a recent afternoon, Mr. Montalvan and Tuesday walked to a nearby subway station. The platform was crowded. Mr. Montalvan began to look agitated. Tuesday, who had been lying at his feet, jumped up and stood between his master and the nearest cluster of people, creating a buffer. Mr. Montalvan’s breathing noticeably stabilized.

The train approached. Mr. Montalvan bent down to tie his Army combat boots, scratched Tuesday behind the ears, and they made their way aboard.

4 thoughts on “The Psychiatrist is In: 5-cents”