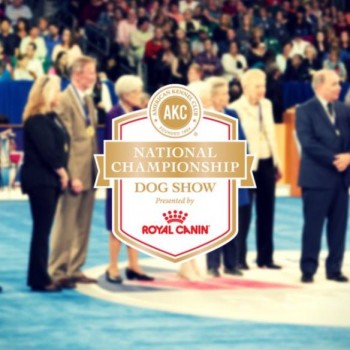 It must be “write about dog shows” day. Just after my earlier post, I received this in my in-box from the American Kennel Club.

We are excited to announce that in its 17th year, the AKC National Championship presented by Royal Canin has again drawn the largest entry in the history of the event! Dogs from 50 States and 44 Countries will compete for Best in Show this December. 4,803 dogs are entered this year with more than 1,200 puppies entered to compete in the all-new inaugural AKC/Royal Canin National All-Breed Puppy and Junior Stakes.

I attended this show last year and had a wonderful time. It’s neat to immerse yourself in an all dog all the time kind of world for a weekend.

The AKC National Championship presented by Royal Canin has drawn record entry numbers in its 17th year. An entry of 4803 dogs will compete for the title of National Champion on December 16 and 17, 2017 in Orlando, Florida. Combined with the other weekend events including the inaugural AKC Royal Canin National All-Breed Puppy and Junior Stakes, AKC Agility Invitational, the AKC Obedience Classic, AKC National Owner-Handler Series Finals, NADD/AKC Diving Dogs Championship, and the Junior events, the overall show totals top 8,600 entries, making this the largest dog show held in the United States since the AKC 1984 Centennial event and the largest dog show in North America.

“The AKC National Championship presented by Royal Canin is a must-attend event,” said Dennis Sprung, AKC President and Show Chairman. “With more than 1,000,000 square feet of event space, top canine athletes competing in a wide variety of dog sports, tons of vendors selling unique dog-themed items in time for the holidays, more than 160 AKC Meet the Breeds® booths and more, this unique experience is truly a canine extravaganza.”

Judges: Judge Mr. Roger R. Hartinger of Cincinnati, Ohio will select the AKC National Championship Best in Show (BIS) winner. The owner(s) of the BIS winner will receive $50,000. Mrs. Paula Hartinger of Cincinnati, Ohio will judge Best Bred-by-Exhibitor in Show from over 1079 Bred-by-Exhibitor entries (dogs being shown by their owner/breeder). Best Bred-By Exhibitor in Show will receive $15,000. Best in Stakes at the inaugural AKC/Royal Canin National All-Breed Puppy and Junior Stakes will be judged by an elite panel of three All Breed Judges: Mrs. Paula Hartinger, Mr. Roger R. Hartinger and Dr. Steve Keating. These esteemed judges will determine the winner from 1229 entries to be crowned the AKC Royal Canin National All-Breed (Puppy/Junior) of the Year.

AKC National Owner-Handled Series Finals: The AKC NOHS Finals Best in Show competition will be judged by Ms. Patricia W. Laurans of Newtown, Connecticut on Saturday, December 16. This invitation-only competition is open to the top ten ranked dogs in the AKC National Owner-Handled Series in each breed/variety from the 2017 qualifying year and drew an entry of 705 dogs. The NOHS Group Finals will be taped and available on demand at www.akc.org.

AKC NATIONAL CHAMPIONSHIP BY THE NUMBERS

· All 190 AKC recognized breeds are entered to compete.

· 4,803 entries in the AKC National Championship

· The largest entries include:

· 162 juniors, ages 9-17, who have met high academic standards and qualification criteria based on year-round competition, will compete in Junior Showmanship.

· More than 630 dogs will compete in the North America Diving Dogs/AKC National Championship.

OBEDIENCE CLASSIC AND AGILITY INVITATIONAL BY THE NUMBERS

· 235 entries in the two-day AKC Obedience Classic, including 60 breeds from 30 states, Canada and Puerto Rico

· 716 entries in the AKC Agility Invitational, including 166 breeds from 45 states and 4 countries

Purchase tickets or get more information about the show. Or check them out on Facebook and Twitter.