The Canton Police Department regrets to report that K9 Jethro passed away this morning. He was shot multiple times while searching a building for a burglary suspect early Saturday morning. The suspect is in custody.

Not that there’s any new information here. I thought there would have been when I promised to share it.

Many people on Facebook have expressed an interest in what sort of punishment the shooter will receive. Although there are federal statutes that specify harsh sentences for killing a federally-employed K-9, the rules here in Ohio are pretty weak.

I wanted to link you to a post honoring Jethro from a friend of mine, pet artist BZTat.

She is much better than I am at capturing the enormity of the loss our shared city experienced today. And she’s an awesome artist, to boot! She has volunteered to paint a portrait of Jethro for the Davis family. I hope they take her up on it! 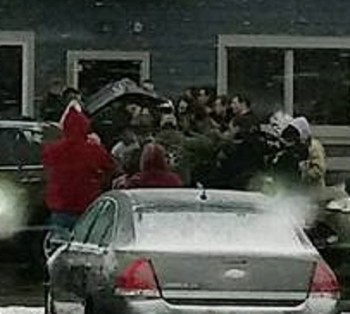 A friend of mine happened to be driving past the vet clinic while they were removing Jethro’s body.  Note the line of officers standing watch.

I’m trying to find the media release from the police department, but no luck yet.  I’ll post it here when I get it.

The world seems just a little less bright today. We lost one of the good guys.

I just returned from the ER vet, where everyone is still pretty shell-shocked. When I saw Jethro last night, his breathing was very labored. It was apparent he was fighting as hard as he could. By this morning, he was so tired, he could no longer fight. He fell asleep and stopped breathing. Our prayers go out to Officer Ryan Davis and his family, as well as to the whole Canton PD and Police K-9 Association.

Ryan is in awe of the support he and Jethro have received. The waiting room at the vet is full of officers and their families, all who have come to show their support to the Davis family.

Even though we have surpassed our original goal, we will continue to take memorial donations on GoFundMe. I will be meeting with Canton PD and the Police K-9 Association soon to decide on the most effective way to use your more than generous donations. I’ll keep you posted both here, and on Go Fund Me.

Rest in peace, Jethro. You did a good job. Others will stand the watch from here. 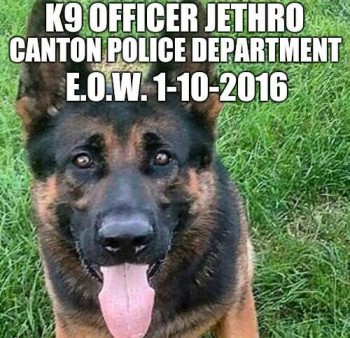 He has succumbed to his injuries. Going to the vet clinic now – more details later.

My local paper had a nice piece today about service dogs. There is an organization here in Canton named Canines Helping Independent People (CHIP) that trains assistance dogs, and they just graduated a new class of dogs yesterday.

END_OF_DOCUMENT_TOKEN_TO_BE_REPLACED

I’m not sure how many readers we’ve got in Stark County, but I got this e-mail from a friend today & wanted to pass it on.