After reading about the losses our military suffered last weekend, I wanted to post something with a military theme.  Just a small way to honor their sacrifice. END_OF_DOCUMENT_TOKEN_TO_BE_REPLACED 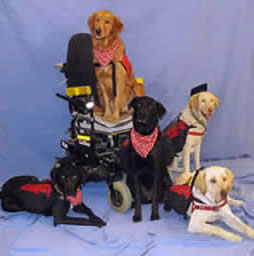 The Associated Press reports today that a new program from the Veterans Administration takes dogs from animal shelters, trains them, and sends them home with soldiers wounded in Iraq and Afghanistan to help them in their recovery.

END_OF_DOCUMENT_TOKEN_TO_BE_REPLACED How many of you received this picture by e-mail, with an accompanying story about how Brutus won the Congressional Medal of Honor from his heroic activities in Iraq?  I have received it several times, and almost posted it, but decided to check it out on Snopes.com first.

According to Snopes, the dog pictured above is Spike, a retired police dog from Scottsdale, Arizona.  Spike is a Belgian Malinois, not a Boxer/Bull Mastiff mix, as the e-mail asserts.

If you want to check it out yourself, click here.

And don’t believe everything you read on the Internet!

No, actually MWD stands for military working dog. The US Air Force has recently shed a bit of light on the training program it uses to train dogs for everything from guard duty to explosives detection.

First, the dog must be the right breed. The Air Force most commonly uses German Shepherd and Belgian Malinois, with a slight preference for the Malinois due to its longer average lifespan. Next, the dog is evaluated for its drive or “ability to remain focused and determined to obtain a goal”, according to Staff Sgt. Manuel Garcia of the 35th Security Forces Squadron.

The dog must undergo basic training, just as airmen do, at Lackland Air Force Base in Texas. The program lasts from four to six months, depending on whether or not the dog gets held back for remedial training.

After being sent to its permanent base, the dog spends a few weeks with its new handler, learning to follow his commands. When the dog is ready, they review the basic obedience learned at Lackland, staying close to the handler and obeying his basic commands.

A few weeks later, the dog moves on to advanced obedience, where he learns to follow the same commands, even though he is off leash and at a distance from his handler. The dog also learns to crawl and roll, tactical moves he may need later.

Soon, the lessons begin to include actual work skills such as detection, attack, search, and working under the gun (literally!)

Once trained, the dog will work between 10 and 12 years, then be retired. He could be adopted, returned to Lackland to train new dogs, or be given to local police departments for further work.

A round of applause for our military working dogs! (As well as those they work with!) 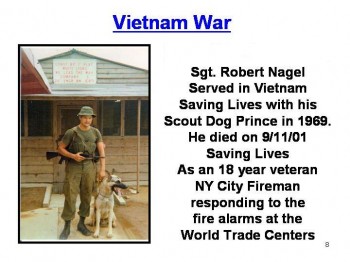 In honor of the Memorial Day holiday, doggies.com is proud to present this list of dogs who made the ultimate sacrifice from 1965 – 1967 during the Vietnam War.  For more information about military K-9 units, visit USWarDogs.org.