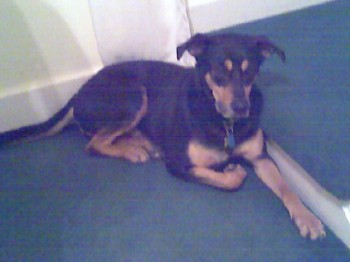 As faithful readers know, I live with four dogs:  Kayla, Cooper, Penny, and Maggie.  The other day, for about the umpteenth time, my kids let the dogs out of the garage door (which incidentally, does not lead to the fenced-in yard).

Penny and Maggie came home pretty quickly, as they always do.  Cooper went over two miles away and fell asleep in someone’s garage.  They called us the next morning to come get him.

However, Kayla seemed to have been swallowed into thin air.  We searched both the area near our home and the route it appeared that Cooper had likely taken.  After two days of searching, we gave up, hoping someone would eventually call us from the number on her tags.  I didn’t want to tell the kids, but I had planned to call the township the next day to see if they had been called to pick up a carcass from the side of the road.

Going to church Sunday morning, we told the kids they would have to say a prayer for Kayla.  After church we decided to go out to lunch at Kremeland, an ice cream stand in the same general direction as where we had picked up Cooper.  When we got to the intersection where we would normally have turned right to go to the restaurant, one of the kids said, “Turn around!  I think I just saw Kayla!”

Turned out, it was not a dog that looked anything like Kayla, but we asked the lady who was out with the dog if she had seen a loose black dog.  She said, “I saw a black dog with a tan face near the Tastee Creme about 20 minutes ago.”  The Tastee Creme is on the road where we would have turned right, but it is to the left of the road we were on.

So, we went back to the intersection, turned left and went clear down to the highway, screaming “Kayla” at the top of our lungs.  No luck.  We decided that in 20 minutes, she could have easily made it deep into the woods lining both sides of the road, so we went back to plan A – going to Kremeland.

As we drove along, out of the corner of my eye, I saw something moving on one of the sidestreets.  I’m still not sure what made me turn around, but I did and drove up the cross-street.  Sure enough, it was Kayla!  She was VERY happy to see us.

Other than being extremely tired and a bit travel-worn in the paw-pads, she is fine!  What a relief!

Two morals to the story:  Make sure you have identity tags on your dogs, and never give up hope of finding them if they get loose.