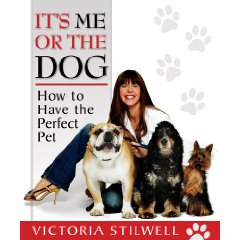 Have you seen the TV show called “It’s Me or the Dog“?  I think it’s on Animal Planet, and I think my son has been spending way too much time watching it.

If you haven’t seen the show, the basic premise is this:  couples who disagree over how much dog is too much hire a trainer named Victoria to help them correct the most irritating of the dog’s behaviors.   Victoria’s book (pictured above) is available on Amazon.

Apparently, on one of the recently broadcast shows, Victoria helped a dog learn how to “leave it” when he had picked up something he wasn’t allowed to have.

So last night, my Vizsla Cooper brought me a ball, which he doesn’t do very often.  When I took the ball from his mouth to throw it for him, he let go of it much easier than he does most things.  My middle son Jimmy saw it and crowed, “He watched Victoria!  He learned how to leave it!”