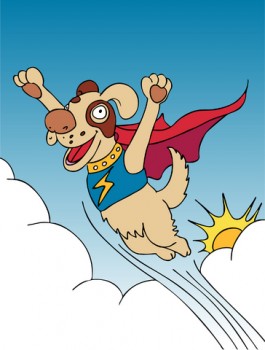 I recently wrote an article called Extraordinary Hero Dogs for our Doggies Den article library.  I’m not sure when it will be available, but I thought I’d give you a preview here.  These are dogs who, although not specifically trained to be assistance dogs or rescue dogs, performed an act of heroism to benefit their families, or in some cases, total strangers.  Out of the forty-four dogs profiled in the article, here are what I consider the top ten.

10.  Delta, a dog from the ancient Roman city of Pompeii, who saved his boy from three disasters before they were both killed by the volcanic eruption of Mt. Vesuvius which destroyed the entire city.

9.  Balto, the Alaskan Malamute who led a sled team to carry diphtheria serum to Nome, Alaska in 1925, saving all of the town’s citizens from an epidemic.

8.  Sadie, a bomb sniffer from Afghanistan who was recently awarded Britain’s Dickin Medal for valor.

6.  Blue, an Australian Blue Heeler, who took on an alligator in defense of her master.

5.  Bud, a Border Collie / Lab mix who dragged his boy up a bank after the boy fell into a stream and broke both of his arms.

4.  Villa who tramped down a path out of a snowbank for an 11-year old neighbor who was lost in a blizzard.

3.  Koda, a dog who had been abandoned, rescued, then lost and picked up by a family on a camping trip.  When the family’s 2-year old got lost in the Yukon wilderness, Koda kept him warm until rescuers found him the next day.

2.  Toby, a Golden Retriever who performed something similar to the Heimlich manuever when his mom choked on an apple slice.

1.  Napoleon, an English Bulldog who was not supposed to be able to swim, but who jumped into a lake to save a burlap bag full of abandoned kittens.

Kudos to all of these exceptional dogs!