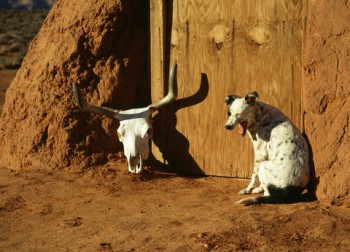 Steven Sable has designed a photography exhibit called “The Rez Dog Biographies” to highlight the plight of desert strays.  What got Sable interested in the topic?  On a landscape photography trip in the desert Southwest, he stopped to take a picture of a deserted highway in Arizona.  Along came a stray to see him, and Sable, an animal lover, adopted the dog on sight.  Although the sheltie/corgie mix was only about 3 years old, her teeth looked like they belonged to a senior citizen.

Known as Rez Dogs, dogs on Indian reservations are often strays.  To survive, they have to adapt to the conditions there, including modifying their diets to use plants and insects rather than primarily meat.  According to Sable, the teeth are the defining characteristic of these strays.  Since everything they eat is coated in sand, their teeth get worn down prematurely.

The purpose of the photography exhibit is to create awareness of these dogs, as well as to raise funds to help them.  He identifies the For Pet’s Sake Humane Society in Cortez as “one of the few groups that was having a positive impact” on the overpopulation of these dogs.  The pix are absolutely beautiful, and the text is heartbreaking.  Take a look.

One thought on “Dogs on the Reservation”