Did you know?  May 4th – 10th is not only Be Kind to Animals Week, it is also National Pet Week.  AND, the month of May has been designated as “Go Fetch!  Food Drive for Homeless Animals Month.”  So why not consider fetching some food and taking it to your local shelter. Even NASCAR star Kyle Busch is getting involved in helping shelter dogs.

END_OF_DOCUMENT_TOKEN_TO_BE_REPLACED 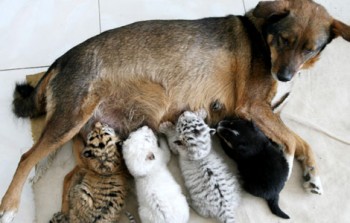 They have been nursed by a dog since they were rejected by their mother shortly after birth 10 days ago, said Paomaling manager Chen Yucai.
END_OF_DOCUMENT_TOKEN_TO_BE_REPLACED

A Springer Spaniel named Lucy was thought lost after an explosion at her owner’s snowboarding and dog sledding business left behind nothing but a pile of rubble.

The AP reports her owner, left critically wounded in a Denver hospital was happy when friends brought Lulu for a visit.  She was found laying in a crawl space beneath 15 feet of the demolished building.  Veterinarian Christine Murphy suspects the pup survived by drinking melting snow.  Full story here.

Have you been following the news of pets that are being abandoned at record rates due to the economy?   Seems that those who have lost their jobs can’t afford to keep their pets, which makes sense, but boy what a hard choice to make.  I know, you have to feed your kids and pay your electric bill, but it sure would be hard to have to give up Fido just to make it through.  END_OF_DOCUMENT_TOKEN_TO_BE_REPLACED 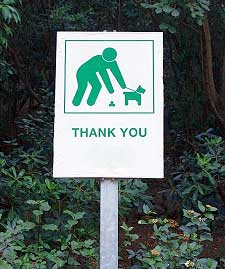 There are a lot of great “green” activities you can do with your dog. Hiking is one example, as long as you follow the tenets of “leave no trace”. In other words, don’t leave doggy-doo, litter, or trampled and broken plants.

Here are some other suggestions for keeping your dog green:

In an article from The Herald, a Scottish plan to crack down on irresponsible dog owners who let their pets run dangerously rampant has met with positive response. Alex Neil, an SNP backbencher received about 100 responses to his proposed Control of Dogs Bill, which calls for a new approach. Under the new proposal dog owners could be liable to pay up to £5,000 (about $9,723 US dollars) for injury or damage, with the most severe penalties for more serious cases being unlimited fines and up to two years in jail.

The proposed law is meant to operate as a preventive, enabling control orders to be issued to owners of dangerous animals. The orders could require muzzling, re-homing the dog, or owners being required to attend dog-training courses.

Mr. Neil’s approach is to shift focus from the dogs to the owners, as he feels the owners should be held responsible for their dogs. Current legislation focuses more on specific breeds and he said this has not made the public safer.

“There is a minority of dog owners out there who are simply not responsible with their dogs, and we need ways to act against them,” said Mr. Neil. 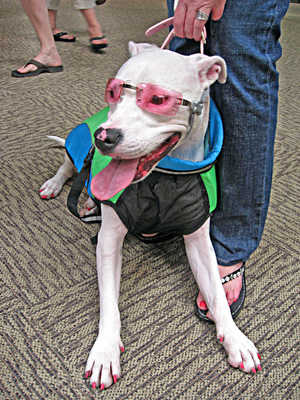 At the Just Dogs! fashion show at the Victoria Mall on Saturday, fifteen dogs modeled outfits to promote awareness for organizations that help dogs. Lexie and Koda, known as a teddy bear breed, showed off their bridesmaid and best man ensembles to the audience while children reached up to pet their heads.

Lexie and Koda’s owner Tina Montgomery brought four dogs to the fashion show, dressing them up as bride and groom, in swimsuits and as rockers.

Owner of Just Dogs!, Will Cleveland ordered wedding gowns and tuxedos for the second annual show. He hopes the hundreds who gathered to see the cute puppies noticed the organizations that encourage spaying and neutering.

“We’ve got too many dogs that don’t have a home now,” Cleveland said.

Carol Kopszywa, owner of Nikki, a four-month-old Siberian Husky is not going to let her pup be put to sleep or lose the chance for a full life with a truly caring owner. At about 9 weeks of age, Nikki was diagnosed with a congenital disorder that will require a $4,000 operation without which her life expectancy is only about 6 to 12 months.

Carol Kopszywa, a resident of Ocean Springs, Mississippi, wondered if people would care enough to help Nikki have a chance to live a full life. We are thrilled to report people do. The owners of Bayview Pet Medical Center held a dog-wash fundraiser for Nikki on Saturday and raised nearly $500.

Nikki’s condition causes her blood to bypass the liver where toxins are normally filtered out. The result is her blood fills with toxins that cause further liver damage and neurologic injury. She will be taken to the LSU School of Veterinarian Medicine in Baton Rouge for surgery.