When officers responded to a domestic disturbance call in Greenwood, Arkansas last Wednesday, a gunfight killed one officer, wounded another, and wounded K9 officer Kina, who had been in her cruiser. The dog escaped the vehicle and ran from the scene. She hadn’t been seen for two days, until someone who was building a new home near the scene of the shooting found her hiding out in the vacant home. The man called police, who responded immediately, keeping Kina contained in a fenced area until her handler arrived.

The video from Channel 5 News will bring a tear to your eye, as the dog bounds to meet her best friend. She had been shot twice, but appears to be healing well. They will need to evaluate her to see if she can function as a police dog after the trauma, but she is physically going to be ok.

Our sympathies to the Greenwood PD on the loss of one of their human officers during the domestic call. 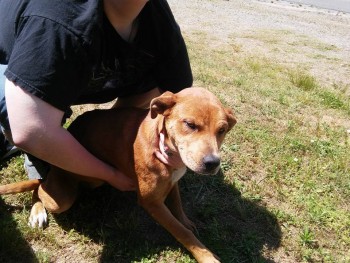 My cousin Ginger’s experience today with a stray:

So I got in my car and drove to the Decker’s to put some gas in my car. As I was on the way there, I looked in the mirror and I saw my stray Girl dog running and following me.
I immediately slowed down and pulled over to the side of the road. She came to me wagging happily. I opened the door and put her in back seat.
END_OF_DOCUMENT_TOKEN_TO_BE_REPLACED

WARNING! Graphic Content!
The audio on this clip isn’t very good, and the original video is not sharable, but you can see the whole thing here, if you can bear it.

A reporter from the Associated Press has put together a report from Searcy County, Arkansas (about 100 miles north of Little Rock). Apparently, over 5o dogs were fed hot dogs laced with poison, then summarily executed. Some of the bodies were found late Thursday night by loggers prospecting for timber land. They had a contact at the Arkansas Game and Fish Commission, who then contacted the Humane Society.
END_OF_DOCUMENT_TOKEN_TO_BE_REPLACED 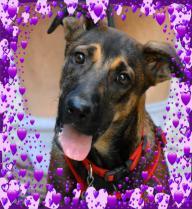 Meet Betty! This pretty girl is living in Hot Springs, Arkansas with Paws and Claws Rescue. Here’s what their PetFinder post has to say about her.
END_OF_DOCUMENT_TOKEN_TO_BE_REPLACED