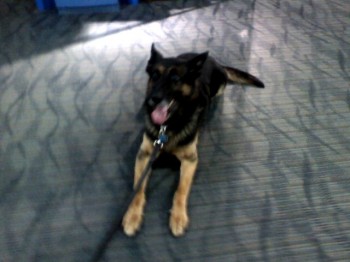 It seems wherever I go, I make new dog friends.  This beauty was working at the Columbus airport when I went to meet my mother for our weekend trip to Boston.

For the life of me, I cannot remember this dog’s name, but I’ve never met a friendlier police dog.  I was almost afraid he was alerting to me because he walked right up to me and started sniffing me and wagging his tail.  The officer just laughed and said, “No, he’s just smelling your dogs on you.”

Thanks for keeping our airports safe, Mr. What’s Your Name!

(Officer – If you read this, please remind me of the name in the comments below.  Tks.)

UPDATE:  Thanks to Officer Daives for reminding me that the dog’s name is Segal! 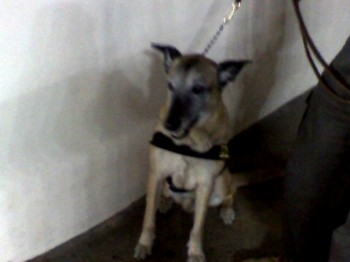 We went to see Barack Obama at a rally in Cleveland last Sunday.  Stationed just behind us was this beauty.  I didn’t think to ask his handler which agency they were from, but I’m assuming he is a bomb sniffer dog – possibly with the Secret Service.  Considering all the noise in the arena, he was so incredibly calm! 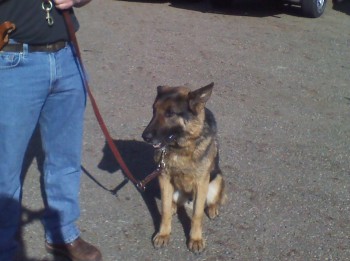 One of the other hats I wear (when I’m not wearing my “Blogger Extraordinaire” hat) is that of a rape crisis educator.  I’ve been teaching some classes about law enforcement’s response to sexual assault at the Canton Police Department, and one of my students last week was a K-9 officer who works with Risk, pictured here.

END_OF_DOCUMENT_TOKEN_TO_BE_REPLACED

Freddie, a Seattle PD bomb squad member for more than six years, has died. He was taken to the vet Saturday, where he required surgery to remove his spleen and multiple transfusions. Unfortunately, he died soon after the surgery, although he had been revived prior to the surgery when his heart stopped.

Freddie and his partner, 24-year veteran Officer Craig Williamson, had been together since 2003 and had received numerous honors including the Award for Excellence at the 2008 Seattle Police Foundation awards ceremony and being named a premier team by the Bureau of Alcohol, Tobacco, and Firearms, which trained Freddie.

Our condolences to Officer Williamson on the loss of his faithful companion.