Have you seen what Derrick Nnadi did to celebrate the Chiefs’ Super Bowl win? The defensive tackle contacted the KC Pet Project and pledged enough money to pay for the adoptions of ALL of the dogs they had at the shelter! END_OF_DOCUMENT_TOKEN_TO_BE_REPLACED

Yesterday was a headline day with all the bowl games, not to mention a break in the weather. What made the biggest impact on your day? 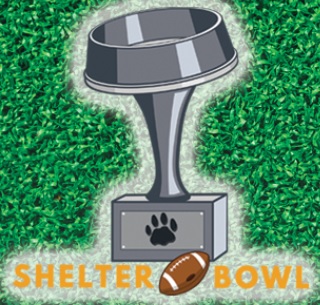 In honor of the big game this week, GreaterGood.org’s Rescue Bank is celebrating our fourth annual Shelter Bowl.

Help us meet our goal of $20,000 to provide nutritious pet food to shelter animals all across the United States.

Food is one of the most vital needs for animal shelters and rescues. It’s also the largest expense for many of these organizations, but more money spent on food means less funding for other life-saving programs for the animals in their care. END_OF_DOCUMENT_TOKEN_TO_BE_REPLACED

Release the dogs! This cute litter of puppies correctly predicted the Broncos would win yesterday’s Super Bowl! And the clip provides your daily dose of cuteness.

Mark your calendar and set your DVR! The Puppy Bowl returns February 7th (that’s THIS Sunday!) at 3 pm Eastern Time. If you’re not familiar with it, Puppy Bowl runs every year on Animal Planet on Super Bowl Sunday, in an attempt to get puppies adopted from many shelters across the country. In small groups, the puppies are placed in a small arena made to look like a football field. They play and romp, and sometimes even fall asleep on the field. Meanwhile, an announcer natters on as if the dogs are actually competing. When a puppy happens to stumble across the goal line, a touchdown is scored. It’s all really very cute, and an enjoyable way to spend 2 hours while waiting for the game to start. Here’s what Animal Planet has to say about this year’s show: END_OF_DOCUMENT_TOKEN_TO_BE_REPLACED

I think GoDaddy was going for edgy when they put together this year’s Super Bowl ad, but I’ve heard others say the ad was meant to be satire, based on the success of Budweiser’s puppy ads. Either way, I’m glad they’ve decided to pull it. There was such a groundswell of emotion touched off by the commercial that the company decided they couldn’t air it during the big game.

The part that was most disturbing to me was not the punch line, however. It was the puppy being bounced out of the pick-up truck in the first place. Dogs, especially puppies, should never ride in the back of a truck!

What was your opinion of the ad?

Just heard that GoDaddy has pulled its controversial ad from the Super Bowl after a huge negative response. The ad was previewed on The Today Show, where the hosts expressed their horror. Then a Change.org petition was started, which drew over 42,000 responses. I’m pretty sure GoDaddy is getting more FREE publicity over this gaffe than they would have from simply airing the commercial during the game.
END_OF_DOCUMENT_TOKEN_TO_BE_REPLACED

This is the Go-Daddy ad for this year’s Super Bowl. Apparently, people are already taking sides as to whether or not it’s appropriate.

Budweiser leaked their Super Bowl commercial a little early, and it’s got puppies!

Tomorrow is Super Bowl Sunday, and that can only mean one thing for dog lovers like us: Puppy Bowl IX! Will you and your dog be watching this annual tradition on Animal Planet?